by autographsale on November 28, 2017 in Autograph Examples

Ozzy Osbourne’s regular use of alcohol and other drugs led to his sacking from the band in 1979. Replaced by former Rainbow singer Ronnie James Dio. Following two albums with Dio, Black Sabbath endured countless member changes in the 1980s and 1990s. That included singers Ian Gillan, Glenn Hughes, Ray Gillen, and Tony Martin, as well as several drummers and bassists. In 1992, Iommi and Butler rejoined Dio and drummer Vinny Appice to record an album. The original line-up reunited with Osbourne in 1997 and released a live album Reunion. Black Sabbath’s final studio album and 19th overall, 13 (2013), features all of the original members but Ward. A year after starting a farewell tour, the band played their final concert in their home city of Birmingham on 4 February 2017.

Black Sabbath autographs have now become a highlight to any autograph collector and fan due to the band being so highly sought after. Additionally, The founding fathers of Heavy Metal and their autographs will dramatically increase in value over the years. In addition, below we have shown some examples of the Original Black Sabbath line-up. Notice over the years how their signatures have changed for all band members. 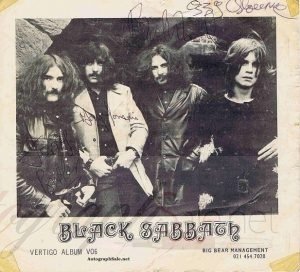 With the release of Black Sabbath autographs 1975’s Sabotage album, the band’s fortunes took a turn for the worse; despite the strength of songs such as “Symptom of the Universe” and “Am I Going Insane,” the album failed to achieve the same status as its predecessors. Punctuating this shift, they were also forced to cut their subsequent tour short when Osbourne was injured in a motorcycle accident. 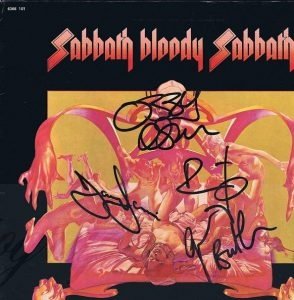 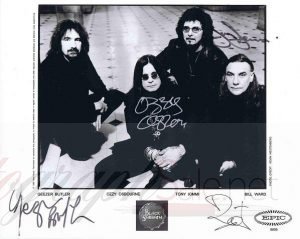 The band’s use of religious symbolism and mythic themes lent a Gothic cast to their public personae. It also earned them constant criticism from right-wing groups, negative publicity that simply fueled the band’s popularity with its fan base, mostly young males. As was the case with their first two albums, their subsequent efforts Master of Reality (1971), Vol. 4(1972) and Sabbath Bloody Sabbath (1973) all found chart success, eventually achieving platinum status in the United States on the strength of such metal classics as “Sweet Leaf,” “After Forever,” “Snowblind” and “Sabbath Bloody Sabbath.”