by autographsale on April 11, 2018 in Autograph Examples 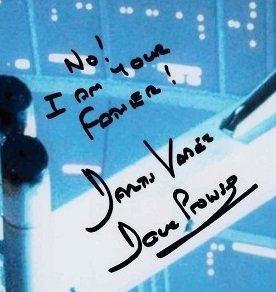 David Prowse (born July 1, 1935, in Bristol, England) is a former bodybuilder and weightlifter who became an actor. He selected to play Darth Vader in the original trilogy and The Star Wars Holiday Special due to his height and girth. He would speak the lines from within the suit during filming in his Bristol accent. However, as this ultimately clashed with George Lucas’s idea about Vader, James Earl Jones dubbed over as Vader’s voice — a fact unknown to Prowse at the time of filming. 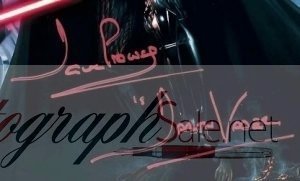 Prowse complains that he never got any publicity as Darth Vader. He had chosen to play Vader because he felt the villain was usually the most memorable. Prowse’s favourite acting role, however, was as the Green Cross Code Man, a character used in public service announcements in the United Kingdom to teach children road safety. 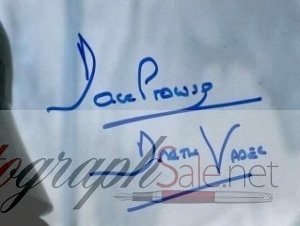 Prowse attends fan conventions and signs his autographs “David Prowse IS Darth Vader.” However, Prowse banned from official Star Wars conventions, such as Star Wars Weekends in Orlando, by George Lucas, supposedly because of Prowse “annoying” him.

In 2005 Prowse joined Jeremy Bulloch, Michael Sheard and Orli Shoshan in the final two parts of UK fan film trilogy Order of the Sith. Prowse played a rebel officer in charge of the main character, Fuser Marcus. The films made in aid of the Save the Children foundation. As of 2017, Dave Prowse autograph no longer attends conventions and in 2018 he stopped signing autographs altogether. 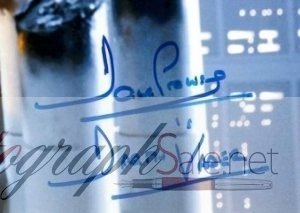 It is a common misunderstanding that during the production of Star Wars: Rebel Assault II: The Hidden Empire, Dave Prowse autograph hired once more to reprise his role as Vader in the game’s full motion videos. Vader actually portrayed by C. Andrew Nelson. 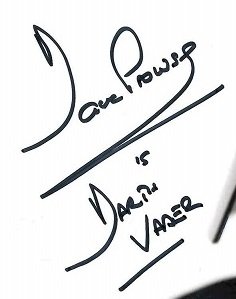 Early in his career, Dave Prowse Autograph in a film called Frankenstein and the Monster from Hell; produced by the English Horror Film Company, Hammer Studios. Prowse played the role of the Frankenstein Monster. In the same film, Peter Cushing who would later play Grand Moff Tarkin in Star Wars; Episode IV A New Hope, plays Dr. Frankenstein. 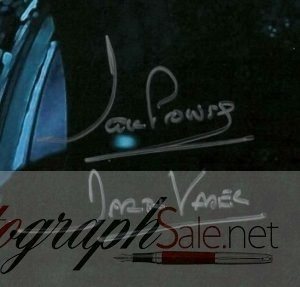 Anakin Skywalker, better known later in life as Darth Vader, is a fictional character in the Star Wars franchise. As Darth Vader, he appears as the predominant antagonist throughout the original trilogy, while his younger self as Anakin Skywalker is the main protagonist of the prequel trilogy. Star Wars creator George Lucas has collectively referred to the first six episodic films of the franchise as “the tragedy of Darth Vader.”

Originally a Jedi prophesied to bring balance to the Force; Anakin Skywalker lured to the dark side of the Force by Palpatine, who is secretly a Sith Lord. After fighting a lightsaber battle with his former mentor Obi-Wan Kenobi in which he dismembered; Vader transformed into a cyborg. He then serves the Galactic Empire as Darth Vader until he redeems himself by saving his son; Luke Skywalker, and killing Palpatine, sacrificing his own life in the process. He is also the father of Princess Leia Organa, the secret husband of Padmé Amidala, and grandfather of Kylo Ren, the main villain of the Star Wars sequel trilogy. 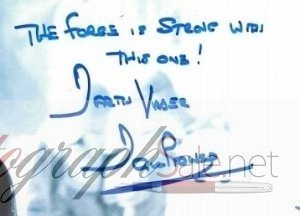 The character has been portrayed by numerous actors. His cinematic appearances span the first six Star Wars films, as well as Rogue One; and the character referenced in both The Force Awakens and The Last Jedi. He also appears in numerous iterations of the Star Wars Expanded Universe; including television series (The Clone Wars), video games, novels, literature, and comic books.

Darth Vader has become one of the most iconic villains in popular culture; and been listed among the greatest villains and fictional characters ever. The American Film Institute listed him as the third greatest movie villain in cinema history on 100 Years… 100 Heroes and Villains, behind Hannibal Lecter and Norman Bates. His role as a tragic hero in the prequel trilogy was met with mixed reactions. 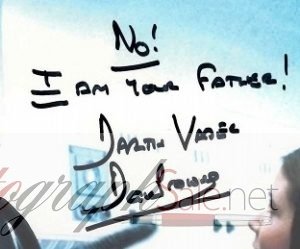 How to buy an authentic Dave Prowse Autograph

Obtaining these were easy from conventions but now Dave doesn’t sign autographs anymore from 2018. If you were to purchase one online please have a good look and compare to these autograph examples we have shown as these are authentic Dave Prowse Autograph Examples. Also, always buy from a trusted seller; approved by authorities such as the UACC. All these sellers will offer a lifetime money back guarantees Certificates of Authenticity.