by autographsale on August 12, 2019 in Autograph Examples

Richard Starkey. MBE (born 7 July 1940), known professionally as Ringo Starr. An English musician, singer, songwriter and actor who gained worldwide fame as the drummer for the Beatles. He occasionally sang lead vocals, usually for one song on an album. Including “With a Little Help from My Friends”; “Yellow Submarine” and their cover of “Act Naturally”. He also wrote the Beatles’ songs “Don’t Pass Me By” and “Octopus’s Garden” and is credited as a co-writer of others including “What Goes On” and “Flying”. 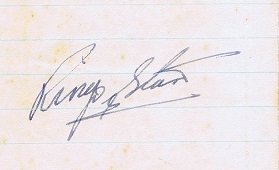 Starr was twice hit by life-threatening illnesses during childhood. And as a result of prolonged hospitalizations fell behind in school. In 1955, he entered the workforce and briefly held a position with British Rail before securing an apprenticeship at a Liverpool equipment manufacturer. Soon afterward, he became interested in the UK skiffle craze. Developing an admiration for the genre. In 1957, he co-founded his first band. The Eddie Clayton Skiffle Group; which earned several local bookings before the fad succumbed to American rock and roll by early 1958. 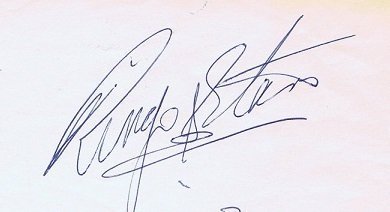 When the Beatles formed in 1960. Starr was a member of another Liverpool group, Rory Storm, and the Hurricanes. After gaining moderate success with the band in the UK and Hamburg. He quit the Hurricanes and joined the Beatles in August 1962, replacing Pete Best. He played key roles in the Beatles films and appeared in numerous others. After the band’s breakup in 1970. Also, Ringo Starr Autographs released several singles including the US number four hit “It Don’t Come Easy” and number ones “Photograph” and “You’re Sixteen”. In 1972, he released his most successful UK single. “Back Off Boogaloo”; which peaked at number two. He achieved commercial and critical success with his 1973 album Ringo. 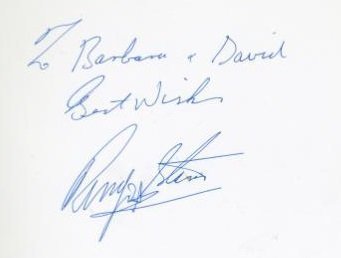 In the early 90’s Ringo Starr autographs changed to just Ringo (then a drawn star) then early 2000’s to just Ringo.